You are here:
News & Press 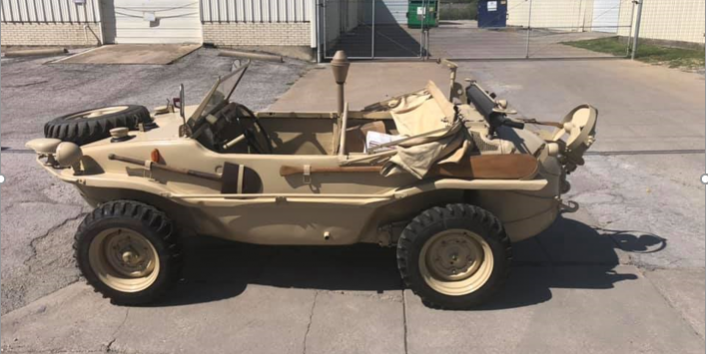 Fort Worth, TX – October 22, 2020 – Ron Sturgeon, the owner of Haltom City-based Fort Worth Car Storage, has been collecting antique autos for more than 30 years.

He has a special fondness for VW’s because he inherited a half-interest in one when his father died when Ron was a teenager. Ron taught himself to repair the bug and eventually started a VW repair shop after he finished high school.

That repair shop morphed into a salvage yard when Ron figured out that he was making more selling used parts from his boneyard than he was from doing repairs. That salvage yard, specializing in foreign luxury vehicles, grew to one of the largest in the United States before Ron sold it to Ford Motor Company’s Salvage Division, GreenLeaf, in 1999.

“The Schwimmwagen 166 is really the holy grail for WV antique car collectors,” said Sturgeon. “Even though the 166 is the most mass-produced amphibious vehicle in the world, with nearly 15,000 made for the German army in the early years of WW 2, fewer than 190 of them remain,” said Sturgeon.

“Edwin Komenda, Ferdinand Porsche’s first body designer, had to modify the body of the VW to create a design that would move smoothly through water,” said Sturgeon. “The Schwimmwagen 166 is capable of speeds up to 10 mph on water and up to 50 mph on land,” added the Fort Worth-based serial entrepreneur and antique car storage facility owner.

Ron Sturgeon, owner of Fort Worth Car Storage and Blue Mound 287 Self Storage, has been featured on CNBC’s Blue-Collar Millionaires program for his success in the auto salvage business. He is the author of numerous books for businesspeople and a business consultant whose recent projects include developing a shipping container business park in Fort Worth Design District and a rapidly expanding chain of beauty salons with hair salon suites for rent.

About Fort Worth Car Storage